Weeping grass is adapted to a very wide variety of soil types. Some types have a broad range of pH adaptation while most prefer acidic soils with a pH of less than 6.0. Some varieties of this grass can survive in strongly acidic soils and others in alkaline soil.

This is an extremely versatile and useful grass. Because of its attractive appearance, its persistence and high grazing value, as well as its tolerance of shade and acid soils, this grass has a wide range of uses. It is suitable for use on roadsides, municipal parks and gardens requiring little maintenance, where once it is established it will provide a persistent ground cover requiring relatively few mowing events each year.

Domestic lawns – the dense foliage and soft leaves means that this grass produces a very high quality lawn, and especially the Griffin variety. The shade tolerance this grass has means that it is very well suited to domestic lawns where shading is common from buildings, fences and trees.

Golf course roughs – Weeping grass does not grow too tall and will permit mis-hit balls to be found.

Pastures in acid soils of moderate to high rainfall where the high quality of fodder, low fertilizer needs and persistence are valued.

Revegetation in conjuction with other native grasses for river and stream edges to reduce erosion.

Inter-row sowing and within-row sowing in vineyards and other horticulture where the persistence of the grass, its low growth and its shade tolerance make it a good choice in the right districts. 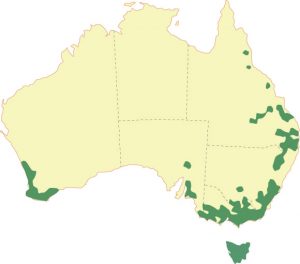 Weeping grass is an Australian native grass that is widely distributed throughout the damper zones of eastern Australia from Cape York to Tasmania. It is also found in the wetter districts of South Australia and in the south-west of Western Australia. It also occurs naturally in New Zealand and Papua New Guinea.