Giant Spear grass is among one of the taller non-bamboo grasses in Far North Queensland. It is a common grass and can be seen around urban areas and other open areas. The stems (or more specifically culms) can get up to over two metres. The seeds are awned, meaning they have a long awn-like appendage that helps them bore into the soil. The awns of the seeds achieve this by operating in a series of twisting movements when moisture level changes. Seeds has a dormancy that can last up to eight months.

It is found from sub-humid to semi-arid areas in the tropics and subtropics where annual rainfall is comprised between 600 and 1000 mm, but it can grow under rainfall lower than 210 mm. It is tolerant of frost but does not grow during winter. Spear grass does not withstand waterlogging but may bear short periods of flooding. Optimal pH for spear grass ranges from 5 to 6.

Giant Spear grass grows in eucalypt forests and woodlands, on brown and red clay loams and occasionally on sandy loams and gravelly soils in the wetter areas. Giant Spear grass is most often found in natural grassland along with companion grasses such as Themeda triandra, Bothriochloa bladhii and Hyparrhenia spp.  Once established, and if defioliation is not too heavy, spear grass may survive several years.

This species is an ideal revegetation species where the reintroduction of native animals is important. It is an important food source for many native birds and small animals. For example, the seeds of Giant Spear grass are eaten by gouldian finch, masked finch and long-tailed finch. Spear grass is used as fodder when it is young. Spear grass is used for thatching, matting or making cellulose for paper, and provides environmental services as a cover crop and biodiversity nest. 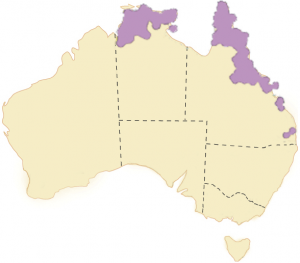